Buy Home Decor After You Envision Your Home's Character 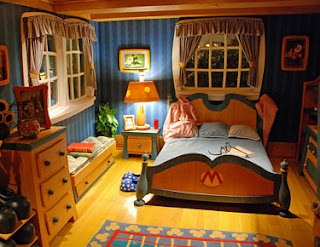 For the first nineteen years of my life I lived in the same town in my parents home. Whatever home decor there was interested me little, it was just there. Then I went to Italy for a year and lived with an Italian Duke and his family. They lived in a villa in Rome. There I noticed the home decor. The rooms were huge. The Duchess had a penchant for elaborate baroque wall mirrors. They were everywhere, with the rest of the home decor to match. Most days the gardener cut arms full of fresh flowers. I often helped to carry them because I liked to follow him around so that I could look at the classical art statue sculptures and fountains. They, and marble benches, strategically placed between the trees and flowers, were the garden decor. Since I liked to do it, it soon became my job to arrange the flowers in decorative vases. I had a free hand in placing them on tables, cabinets and plant stands. It wasn't exactly decorating, but it gave me a satisfying feeling to contribute something to those marvelous rooms.
After one year I moved to Paris, France. Not much scope for home decorating there. I lived in a tiny furnished room, where the home decor consisted of a narrow bed, a pine wood chair, a wardrobe and a wood cabinet with a washbowl. A bare light bulb hung from the ceiling. All I added was a decorative mirror, a reading lamp and a crystal vase, which I kept filled with fresh flowers from the market.

After that it was exciting to move into a house near Los Angeles, California, which I shared with my sister. Without much planning, we decided what we needed and went out to buy whatever appealed to us. As nice as the furniture had looked in the showroom, somehow, in that house it did not seem right. For one thing, it was much too massive and the colors clashed with the paint colors and window coverings. We did not have much time to stew over it since we both carried a full load of courses at the college and worked four hours after class and eight on Saturdays.
The day after I graduated, I got married and my wonderful husband and I moved into an apartment near his work. At first I had fun buying new furniture and making the place look nice, but soon I realized that apartment living was not for me. I missed wandering between the flowers and sitting on the garden bench under the open sky with that first cup of coffee,
As soon as our lease was up, we moved into a house on a steep hillside. We used the furniture we had, even though it looked out of place. Going around to flea markets and buying items without thinking whether they would fit in with what we had, did not help. At the same time my husband inherited his uncle's collectible knives, swords and sabers. They presented a real challenge for me. What was I to do with home decor like that?

Mother Nature soon took care of my dilemma. The house and most of what we owned was burned in the Bel Air fire. Of course I was very sad about the loss, yet I was excited.
Here was my chance to start all over again and this time I intended to make the home decor match the house.

We rented a bungalow with a slanting roof, dark, exposed beams and lots of windows. We moved in with just a few borrowed necessities and stacks of home decor magazines and books. As I saw pictures of things that appealed to me, I would sit in different corners of the empty room I wanted to furnish and envisioned imaginary items in place. It was a great method to decide on my selection. Lime green and lemon yellow were very much in fashion then and probably would have looked ghastly in any of the other dwellings we had had. But in that house, with the dark beams, dark oak flooring and big windows framed by citrus trees, I could envision that it would look nice. And it did. It was a delightful home.

A year later my husband decided to go back to college for his Masters Degree. We loaded what we could into our Volkswagen Bus, sold the rest of our belongings and headed for Austin, Texas, accompanied by two babies and a cat. Money was tight and home decor took a back seat to all else. Like so many student accommodations, ours had a lot of make-do furnishings. The bricks and boards book shelves, the milk crate and plywood tables and second hand sofas and beds. Our newborn slept in what used to be a packing box for toilet paper, nicely lined with colorful fabric. It didn't seem to matter. I devoted my time to my children. My husband devoted his time to his studies .

In less than twelve month he got his degree and was recommended by his professor to a company in Pasadena, California.

We found a lovely cottage style home. Once again I was absolutely thrilled to be able to start decorating from scratch, since we had brought nothing with us. I went through the routine of sitting in different corners of the empty rooms and envisioned what, of the things I had seen in magazines and home decor stores, would look good in that house. I settled on country cottage style home decor and in the end, of all the homes we had lived in, this one, still today, was the one we felt most comfortable and at home in.

Our bliss lasted for almost two years until my husband was transferred to Atlanta, Georgia. Fortunately the company let us fly there ahead of time to check the place out and I could see right away that in the colonial style homes we looked at, country cottage home decor would never do. My husband came to an agreement with his company, that instead of paying for the movers to transport our furniture, they would give him a lump sum.

With great pleasure I acquainted myself with colonial style home decor, sat in the empty rooms envisioning what to put where and in the end came up with a truly elegant period masterpiece. What a delight it was to entertain in that house.

I should have known that it would not last but must admit that I said yes faster than my husband when his boss offered him a job in Nepal.

We had no idea what to expect in that country. Things seemed primitive compared to what we were used to but we loved it. We found a rather grand looking house where the water pipes and electrical lines were all outside the walls. The fuse boxes were right by the entrance so that everybody could see that this house was modern enough to have such luxuries. The floors were naked cement and there was no heating. Sitting in corners of the empty rooms to envision them furnished did not do it here either, since there were no stores where one could just go and buy furniture. Simple beds, with hemp cords strung between the sides and badly made whicker chairs were all one could buy ready made.

Other expatriates advised us to get pictures of home decor we would like to have and take them to a carpenter who may or may not come up with something similar. We did and also found a place in the bazaar where we could order coir carpeting. It did not look like much but felt invigoratingly rough under bare feet. Dishes, cutlery and whatever else one needs in a home also were of ghastly quality, but it did not matter, nobody else had anything better, except for embassy staff, who got everything shipped in. Slowly the pieces of furniture we had ordered were delivered and little by little the place started to look like a home. Finally we could reciprocate for all the many invitations we had accepted from ex pats and local people alike. We might not have had the home decor we would have liked but since the electricity often failed anyhow, by candlelight it did look delightful. Besides, we had one of the best cooks in Katmandu and visitors told us that they would have come to eat his food, had the house been empty.

We were supposed to go back to the United States after my husband's contract was up but even before that, his boss wanted him to transfer to Madras, India. By good fortune we found
an almost new bungalow which had been build on stilts so as to not disturb the roots of a huge holy tree in front of it. The house was built in a square around a courtyard with a mango tree in the middle and all rooms had big glass double doors opening out to it. When I saw the place, I could immediately envision a garden theme and was glad to find fabrics with a lattice and bamboo design for the curtains and matching green upholstery for the sofas and chairs we had made. Even though it took many trips to the bazaar, and frequent reminders to the carpenters, eventually all the home decor complimented the garden feeling I had wanted to achieve. It was like living outdoors.

After that we moved fourteen more times, always to different countries, all over the world, without ever bringing any furnishings with us. Each time I went through the same process of sitting in the empty rooms, envisioning the results I wanted to achieve, then finding the right home decor. The results were always perfect for that particular house.
11:52
Unknown
Buy Home Decor After You Envision Your Home's Character